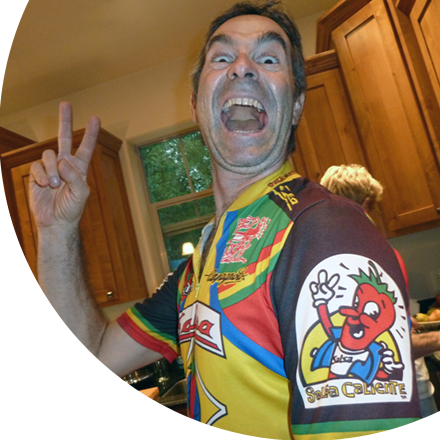 Dave has been part of the biking industry since 1972 and continues to advance the wheelbuilder's art. An off-road bike rider since 1968 and Cat III racer for 10 years, Dave has been hand-building custom exotic bicycle wheels since 1978.

A History of Innovation

I started in the bicycle industry over forty years ago (1972), assembling bikes for $2.50 each, including wrapping bar tape! The real value was how they taught me to maintain a standard of excellence. I earned the job because the owner went outside to check the condition of my bike (a cruddy looking Schwinn that I used for off-road) and found it to function perfectly.

As a road-racer in 1978, I built a competition machine for myself using super light tubular rims (280gms) and radially spoked front sealed bearing hubs (Hi-E). Other local racers requested me to build replicas. Later on (1983) I tried out the first aerodynamic wheel-set (the French made Roval) and found them to be too flexy, so I rebuilt with the new DT bladed spoke and the Hi-E hubs, and a new product was born. I remember other riders protesting our team's use of 18 spoke wheels in massed start races, they never suspected that we raced and trained on the same wheels.

After working with another shop for 13 years, the owner encouraged me to run the first Dave's Wheels (1988) operation from the back room even though it disrupted his business at times.

Before cassette hubs were popular, I hand profiled freewheel sprocket sets to make them shift more like the Hyper-glide cassettes. They were featured in MBA magazine.

Fox Shox thought I was crazy when I asked them to make a shock for my first full suspension bike in 1990 (it had 24" wheels). One year later they had a solid bushing shock that stiffened up the ride of my Cannondale, which I had also improved by revising the pivot and wrapping the chainstays in carbon fiber.

However, the mid '90s brought a lot of competition, and most of the new popular hubs turned out to be

expensive vaporware at times…any sane business would have closed up shop.

Luckily, a little thing called the Internet came along, and with it the honest grass-roots voices to rise above the hyperbole. My first Speed Dream wheelset featured hubs that were wider than any, the rear employed triplet 36 (24 drive side and 12 left side) spoking, and they won the "Rider's Choice" award on Mtbr.com. Other message-boards and review sites popped up over the next few years, making advertising redundant.

At the 1997 Cactus Cup, I exhibited a prototype racer with metal matrix 24 spoke wheels, 9 speeds, and the "Thomas Offset Reduction Concept" (TORC) steering geometry. This geometry was more relevant in motorcycle racing, but it was a good way to make 26" wheeled bikes faster and more stable. ("Putting Theory to Traction" MBA Tech, Nov. 2003)

Taking a cue from rally car racing in the '90s, I started timing myself on the downhill sections of cross-country courses, and learned to improve suspension settings and rider skills to a razor's edge. It was fun…the anguish of XC racing could only sustain the competitive fires just so far. The editor of Mountain Bike Action eventually came to chronicle one of our events ("Fat Tire Rally Racing", MBA Feature, May 2006) This type of racing has become known as Enduro in Europe, and has had a big impact lately.

Although I have never studied business, many who did, complimented my model of success as textbook. It's a simple formula…just don't do anything to others that you wouldn't want done to you…actually, I rarely expect others to maintain the standard that I do.

Only One Way to be The Best

The internet of late has become a jam session of marketing and flashy hype, and soon to be replaced model years. This is not one of those places. That is because the hardware is not the main product purchased here. The goal at Dave's Wheels is to produce the most valuable wheelsets in terms of speed, strength, and superior riding characteristics. It is not good enough to be "pretty good" one year and obsolete the next.

The response of the ride is nearly impossible to convey through marketing hype. Sure, all wheelsets are touted to possess the "master's touch" or the magical formula that guarantees speed and reliability.

Our formula is to combine the ideal rim and hub with the ideal spokes and tensioning, to produce the ultimate result. The superior manufacturer's hardware "becomes" our product…that means representing them as the manufacturer had intended, with the highest level of technical expertise, and then standing behind the result, (our warrantee often exceeds standard coverage).

In a given situation, there is only one way to be the best. For a trail bike that could mean Stan's Arch rims and King ISO hubs, but that's just the starting point. Just as important is the understanding of the suitability and compatibility of components (I answer questions that clients

don't know enough to ask) as well as the optimum spoke gauge, pattern, and tensioning (one builder, one enduring reputation).

Why rely on a website to ascertain that these values are present, when one ride could speak a thousand words more valuable than any advertising hype. We have never joined the hype race because the actual unpaid, unsolicited rider feedback is the only way to find the proof in the pudding! We invite you to ask for feedback on any neutral website, or read the scores of reviews on Mountain Bike Review (mtbr.com) for proof that is unheard-of in this, or ANY industry.

"Wheel building remains more of an art than a science, and the wheel builder's skill is a more significant factor than spoke gauge or number and weight of rim." ~ Campagnolo Technical Bulletin

"We can think of no better upgrade to give your bike than the best wheelset you can get your hands on." ~ Biker Magazine

I ride in Nova Scotia on the east coast of Canada where it is very rocky, rooty and often wet. I'm also not the most experienced rider in the world so I'm sure my (ride) line-choices have often been less than optimal and more punishing then a more experienced rider might choose. Through it all the wheels have held up wonderfully, no issues what-so-ever. In fact, when I recently took the wheels in for truing, after a brief assessment the tech handed the wheels right back to me and said the wheels are spectacular and it would be a waste of money to try and do any better.

I called Dave up and he talked me through my purchase by determining my ride style and weight. We decided on Stan's ZTR Crest 29er rims with Chris King hubs for my carbon HT. The turnaround time was less than a week. Wheels were shipped next day and came professionally packed. I ordered the wrong axle with my front hub and he had the correct one in the mail right away. Kind of wish I could go ride with this dude- he's very personable and knows his stuff. Just finished my first season on these wheels and they are still true. Thanks Dave!

I've had this wheelset since 2006. I never had to true it once. They're still going strong after all these years. Call him, and you won't be disappointed. Also, they are much cheaper than the factory or boutique wheels out there, but built so much better.

The Paradox of the Bicycle Wheel

It has been observed by mechanical engineers that the tensioned spoked wheel is one of the strongest structures, for its weight, that is known to man! More than the sum of its parts, tension is the invisible component that gives the wheel such exceptional load capacity.

That paradox can be expanded to meet other seemingly mutually exclusive characteristics. It is light and strong, but can it be firm, for power transfer and handling precision, while also compliant enough for comfort and predictable response? Can it be reliable for the long term, but also reasonably priced and readily available?

The bicycle wheel is like a suspension component in that it must take in a certain amount of energy, and return it at a certain rate, to create optimum performance. Various bike chassis designs and rider specifics will affect exactly where that point is. An extremely stiff wheel would not be optimum for most riders as there needs to be a lag between throwing the bike into a turn, and accelerating through the apex. Also, the act of pedaling is optimal when the chassis takes in power (by flexing) at one o’clock in the pedal stroke (when the leg and core of the

rider is bent and unable to deliver full torque) and returns it at four o’clock (flexing back) when the body is perfectly positioned to apply peak torque.

Many a bicycle rider has attributed the response of a wheel to its stiffness, when in reality it is the optimum level of flex that provides the most elegant delivery of power to the ground. Uneven surfaces on the road or trail also require compliance in the wheel to allow the bike to track well, without constant inputs from the rider to keep the bicycle on its course. These issues are all a matter of component selection, number and gauge of spokes, and overall equality of tension in the wheel. However, there is presently no way to objectively affirm the forces at work here, so the wheel builder’s task remains more an art of subjectivity and experience, than a clear science of the facts.